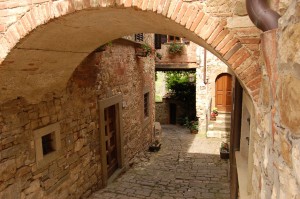 Montefioralle village is probably one of the most ancient in Chianti and is still today enclosed within its original walls. These were initially two circuits but houses now fill the space between the original structures. The walls were octagonal in outline, with four gates, modifications of which still exist. During the Middle Ages it was one of the largest military and administrative centres of the area. The first notice of the settlement is from 1085. It belonged to the families Ricasoli, Benci, Gherardini and Vespucci.