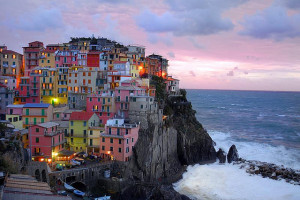 One hour from Livorno and two hours from Florence, the Cinque Terre are a fabulous, picturesque group of five small towns overlooking the eastern Riviera di Levante. Due to the isolation of the villages, perched on top of the rocky capes, the visit of the five lands will require the use of boats or trains as well.

Your tour will start in the tiny fishing harbor of Riomaggiore, the first of the Cinque Terre. Built in between two steep rocky hills that descend abruptly into the sea, you will appreciate the ancient village of Riomaggiore for its colored houses than run vertically.

Following on foot the Via dell’Amore, the Lovers Path carved into the rock and immediately above the sea, you will reach in few minutes Manarola, the second of the Cinque Terre. Considered as an “urban jewel” with its picturesque tower houses, Manarola offers the chance to visit the Gothic style Chiesa di San Lorenzo, the Campanile bianco built for defensive purposes, the Oratorio dei Disciplinati della Santissima Annunziata and the ancient Ospedale di San Rocco.

Proceeding by boat or train, you will arrive in Vernazza, the most attractive village of the entire Cinque Terre. Tall colorful houses and attractive shops invite you to linger here a little longer, maybe to have lunch in one of the various open-air restaurants. Highlights of Vernazza are the Church of Santa Margherita di Antiochia, the Castle of Doria and the Belforte rampart.

Taking the boat or the train for the last time, be ready to say farewell to the terrific marine scenery of the Ligurian coast and reach Monterosso, the final village of the Cinque Terre, where you are supposed to be picked up by your driver. Before heading back to your accommodation, you will have the chance to visit the village of Monterosso with its Church of San Giovanni Battista.

An optional pick up point, often appreciated by the people who are not ready to say farewell to the Cinque Terre, is Portovenere. After Monterosso, take the boat and head back south toward the harbor of Portovenere. The driver will be waiting for you on the dock.